FunkyMuse
Anything which inspires everything
Posts Dagger2 is hard, but it can be easy, part 5
Post
Cancel

In this post we’ll encounter subcomponents and their hierarchy, custom scopes and let’s not waste any time.

Starting off by including the androidx.preferences library

Annotate it with the scope @Singleton because this instance needs to be alive for the app’s lifetime since that’s when we’ll create the graph.

Now we get to the real deal, we need an instance of our PreferenceManager inside the application level, then we have something like.

If we click compile, this will go ahead and compile but there’s one big issue, when we run the app we get something like

that’s because we need a Context in our SharedPreferencesManager, let’s to do the following changes in our SingletonComponent

We’ve learnt about a new citizen in the Dagger world @Component.Factory a factory has to create our component, because our component needs a parameter in this case a Context, in order to create our SharedPreferencesManager, because Dagger doesn’t know how to get a Context we have to provide it to Dagger ourselves.

Inside we have an interface which is essentially our factory and one important function called create, which returns (creates) the SingletonComponent but with a parameter of the type we wanted, in our case a Context.

Also there’s @BindsInstance, this annotation knows about the type of the parameter in our case Context and later on whenever we request this Context within our @Singleton scope we’ll have it provided to us by Dagger we don’t have to do anything else (because this runtime variable is tied to the component’s scope that binds it, in our case SingletonComponent and it’s children, more about that later on).

As I mentioned earlier, Dagger would be far easier without Android’s runtime, but Context is a runtime variable which is available once the app’s started and that’s what complicates things.

Now for the most important part, let’s create the component with a runtime variable, inside DaggerIsEasyApplication and after onCreate() just right before the super call

now when we launch the application, we see the following log 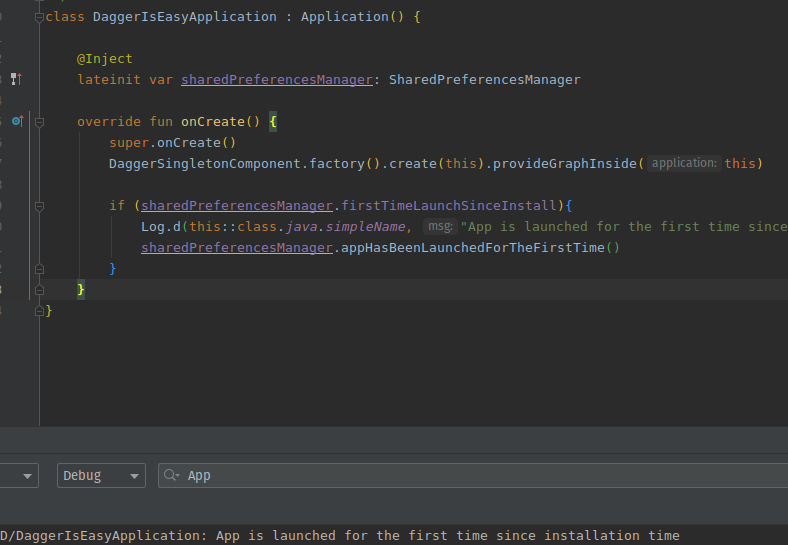 when we rerun the app, we won’t see the log.

run the code and see it crash 💥

The first thing that we need to do is make our ApplicationComponent available to do more than one thing, so we expose it as a variable that we initialize with our create(this) and we also provideGraphInside the application level.

Now SingletonComponent is @Singleton scoped, that means we’ve gotta come with our own scoping if we need something inside an Activity.

The main idea here is that the SingletonComponent is the parent and ActivityComponent is it’s child.

We have to make sure of that, now inside our SingletonComponent we provide the factory that creates ActivityComponent.

the last thing we do is call the creation, that happens inside our MainActivity right before onCreate(), just like in our Application.

When we run the app we can see that we’re suffering from success.

For demonstrational purposes, we want to have savedInstanceState: Bundle? as a runtime variable and the intent within the ActivityScoped instances, change the ActivityComponent's subcomponent factory

Let’s pretend that we have a class IntentHandler coming from a library that we didn’t create, and we included it as an implementation, that class receives an Intent param.

since we don’t own that class, we have to create a module and make Dagger be aware of it.

we use @Provides since the code is coming from outside of our own project, otherwise we could’ve just annotated the class with @ActivityScoped and @Inject constructor() and voila.

However can do the following for example:

we’ve already provided the runtime argument of savedInstanceState: Bundle? using @BindsInstance, now we can play with it.

Let’s tidy up the tings a little bit, create a file called DaggerExtensions and inside

Some might argue that you’ll replace vanilla Dagger completely, well… not quite, inside feature modules you’ll still need to know the concepts (especially factories and components) of pure Dagger, because Hilt doesn’t entirely replace Dagger, it’s built on top of Dagger to abstract away the Android’s runtime boilerplate setup that you have to do every time you create a new project.

In the previous post we’ve seen simpler form of injection with Dagger, but we haven’t talked about the types of injection that Dagger2 has to offer. So far we’ve seen variable injection but ther...