FunkyMuse
Anything which inspires everything
Posts Dagger2 is hard, but it can be easy, part 3
Post
Cancel

In the previous post we’ve seen simpler form of injection with Dagger, but we haven’t talked about the types of injection that Dagger2 has to offer.

So far we’ve seen variable injection but there are construction injection and method injection too.

The easiest of them all is constructor injection and you should strive to use this as much as you can and whenever the circumstances allow you to do so.

For example if we had another class that had a specialty to print these messages, we wanted it to be a part of our Logger class, so let’s go and create it.

We annotate it with @Inject because we want to use it in our Logger class, then inside our Logger

remember, we’re not using a module here because in this sample we are the creators of Logger and Messenger, we’ll see later on when Module is needed, in our MainActivity we’re having the same code, untouched

run it and it works.

Dagger knows how to construct these objects and it’s a breeze working with Dagger on a large project, the compile time error detection is the best guard you have against circular dependencies…

The less common injection, probably one you’ll never use is a method injection, the naming shouldn’t scare you, you’re just annotating a function with @Inject, let’s see an example.

Let’s say we wanted to add a text processor to our Logger class that has a functionality to do some heavy duty processing on the text and saves it to storage then send it to server.

For the sake of this demonstration we’ll create an interface

and a function that adds the text processor, that’s annotated with @Inject and as you can see we have an argument that’s of a type TextToStorage, also the function has to be public due to annotation processor’s limitations we’ve read in the previous blog,

since our function is annotated with @Inject we have to annotate the constructor with @Inject so that Dagger knows what to do, our Logger only sends the message to the listener and doesn’t interact anyhow or knows anything about our TextToStorage class, the addTextProcessor function does everything so that our messages are processed to storage and server.

This example allowed us to notice the order Dagger2 does the injection:

2nd place is method injection (since the object is constructed, methods are traversed that have @Inject annotation)

3rd and last place is variable injection (it’s pretty obvious, everything needs to be ready/created to inject the variable otherwise how would we do it) 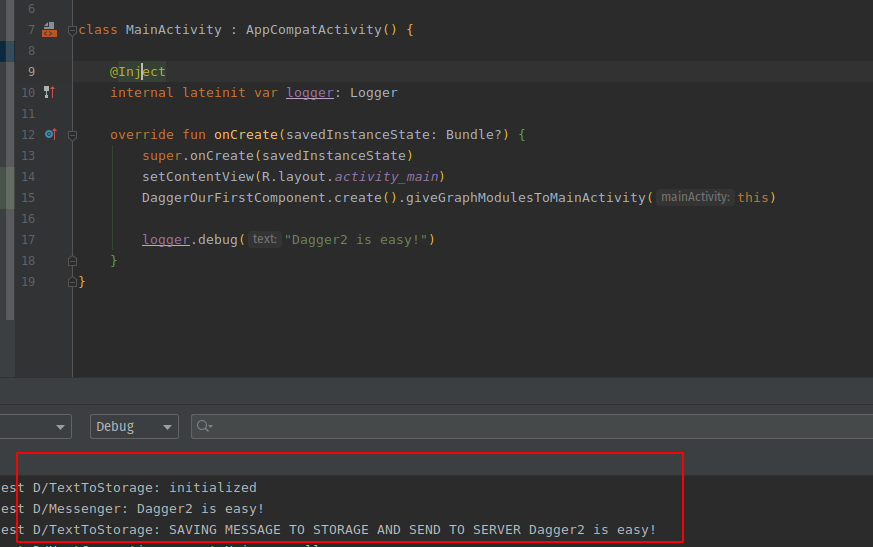 when Logger’s constructor was called and Logger received our Messenger object, Dagger went on further to see for method injection annotated functions, it found our addTextProcessor and since it knew about TextToStorage’s conscturctor, we went on and initialized the listener, lastly the variable injection happened and logger.debug was called in the MainActivity.

As you can notice that Logger was constructed how it supposed to be, our Messenger did it’s job and our TextToStorage functionality was called without even the need to manually call for a constructor or for the class to know about the object’s creation, all in all this demonstrates the power of Dagger2 and how it can scale further. 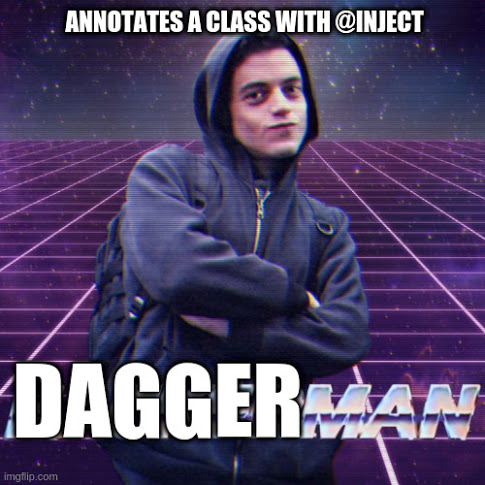 In the previous post we’ve encountered method injection and learnt about the order of injection. Today we’ll explore @Singleton, remember that @Singleton is a scope operator. From the docs we h...