FunkyMuse
Anything which inspires everything
Posts The famous and unthought MVI misconception in Android, alongside MVVM
Post
Cancel

Android development is a vast topic that you can merely master and since it constantly evolves it’s even harder to do so, that’s why there are teams working on one application that does more than one thing and then there’s the guy that wrote Telegram all by himself.

In this blog post we’re not discussing the MVI as in Redux but rather the simplified event based MVI that’s circulating the community that most seem to model their UI upon it.

Each application consists of code that’s been glued together and passed around, just like every other non-Android application, that code is written per set of guidelines and conventions that you follow, a part of that is an architecture.

You might have heard of MVC, then we have MVP, MVVM, MVI etc… if you add any letter after MV it might exist already.

MVVM on Android is actually MVC, if you come to think about it, you usually write CustomNamedViewModel that inherits from androidx.ViewModel, I don’t see the benefit of unnecessary sub-classing, what do you have access to? Nothing, what does it do? Nothing, but does it? Yeah, it just has onCleared method of course and lots of other things going behind the scenes just because you’ve sub-classed something.

The androidx.ViewModel was the iteration of the failed Loaders, by that reference you can think of the androidx.ViewModel as a Presenter, you have a repository in there that brings you data that you expose as a LiveData, StateFlow, Channel etc… you can even call it a Provider.

The whole naming is wrong and they’ve done it again with Jetpack Compose, Google… when will you learn?

androidx.ViewModel is a RetainedObject, an object that’s brought to you by the infamous and powerful data structure, Map<*, *> (dictionary), but as every other thing in Android, none of it could be easily accessed by you (the developer) as they hide it behind factories and not exposing it for unknown reasons?

An abstraction that doesn’t sit between MVVM and it’s not that VM part, is created once and stored inside the ViewModelStore which means that they don’t survive process death (only configuration change) and thats’s why you’ve seen a SavedStateHandle passed inside them, so that you can delegate something to be persisted.

What is androidx.ViewModel, again? A subtle but loud mistake.

I feel sorry for the folks on the Android team that had to agree to such thing as mentioned here, here and here.

But I think that their general case was to ease the developer life and make the API more developer friendly while making you learn new things and thinking you’ve written actual implementation of MVVM.

How is the AAC MVVM an MVC?

M = The data model of your choice (observable or not)

C = ViewModel sub-classing you do

Some may argue that also

M = ViewModel sub-classing you do

Both of which if you come to think about are true.

Otherd may argue that it’s also MVP that doesn’t necessarily mean that you have knowledge about the View and they’ll be correct too, so AAC MVVM on Android can be anything but not MVVM.

The holy grail, MVI or waiting for another coming?

You’ve heard about “MVI” a form of sealed class in Kotlin on Android, looking something like the following

then inside your "ViewModel" coughs presenter coughs controller coughs provider, coughs is this /r/mAndroidDev already, or I need more coughs and memes?

This is iherently wrong, why?

But reading one famous article without questioning it or writing the code yourself, made you believe MVI is the silver bullet on Android, let me get this straight (this is my opinion), there’s no silver bullet nor architecture, nor doing my things right nor your way is right, there’s not one architecture that solves all problems, but this is the developer’s life aint’t it? (kind of ironic when reading this article too)

It seems that nowadays it’s popular to fight about Library X is better than Library Y, let’s talk about architecture because it makes us feel more senior, we’re all juniors, some of us just made more mistakes then the rest, we’re disposable resources at the mercy of a one way street called time, enough with the philosophical terms let’s get back to MVI.

But then again you have the androidx.ViewModel standing in your way in that whole “MVI” naming doing it’s thing. 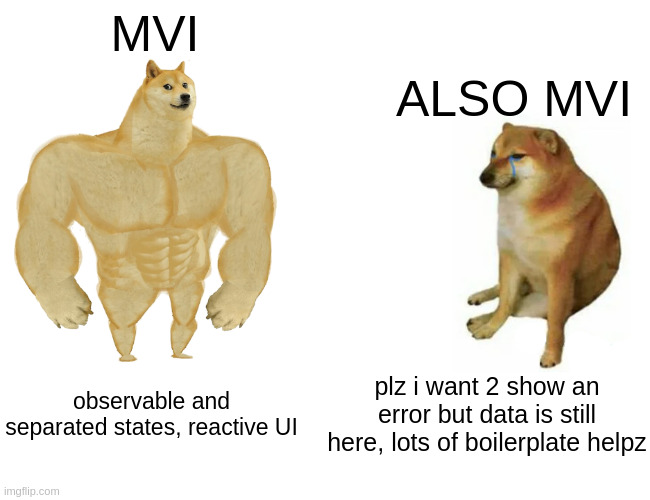 Sealed classes, MVI, my mind hurts already, but why?

In Kotlin usually when you hear about MVI, you’re thinking of sealed classes and interfaces.

In a way they’re a state machine, only one of the declared state can be present at a given time and no other state (of course unless you keep a track of it via some mechanism), but that’s really a poor choice (my opinion) to drive your UI based upon this, or is it? (since many are doing it already)

As you’ve seen that sometimes your requirements are: if data is already loaded and user has seen it and error is next, just show a baloon/snackbar/toast/bear/tiger/ninja turtle/idk? that gives them a warning, maybe it was a timeout of the server and they try again, it will work, you don’t hide the data that’s already present.

With “one declared state present at time”, this isn’t possible.

Sealed classes/interfaces are good at being simple state machines describing your “models” and also you can easily test the behavior of a state machine.

Just as an inline class can be a good database ID.

Some may argue that you’ll be introducing reducers that act as a mediator between the state and the next/previous state/action but things can’t be simpler can it?

MVI (or whatever you wanna call it at this point) falls short at describing your UI, also the bad thing about this is that MVI’s implementation somewhere else can be totally different than on Android, as aforementioned there’s no silver bullet, there’s no one size fits all.

What should I use?

From personal experience what I found to work best is what you discuss within a team or build a hybrid solution that you’ll iterate in time, just to wake up one day and say that it was a bad idea and write something better.

At the time of writing i’ve come up with a solution for my own needs when i’m an calling API and some variation of it (close sourced at the moment) when there are other things involved like non-API, you can look at the API sample.

This is an opinionated article and many people would be butthurt and won’t like what they read.

Thank you for your attention, stay safe, until next time.