FunkyMuse
Anything which inspires everything
Posts Reified, crossinline, noinline and inline everything?
Post
Cancel

This is a continuation of the previous blog post.

As promised this is the blog post where we’ll talk more about the mysterious inline, crossinline and not so confusing noinline and my most favorite, reified.

Let’s say you have a

Inlining is a way to optimize compiled source code at runtime with the help of the JIT (just in time compiler) by replacing the invocations of the most often executed methods with their bodies.

When inline happens we have the following

then essentially when inlining happens, the compiler will be stuck with the

which would be wrong in this case, since the object was actually an instance of Husky.

Well this is Java’s world, which applies to Kotlin but with some smart decisions done by the Kotlin team. 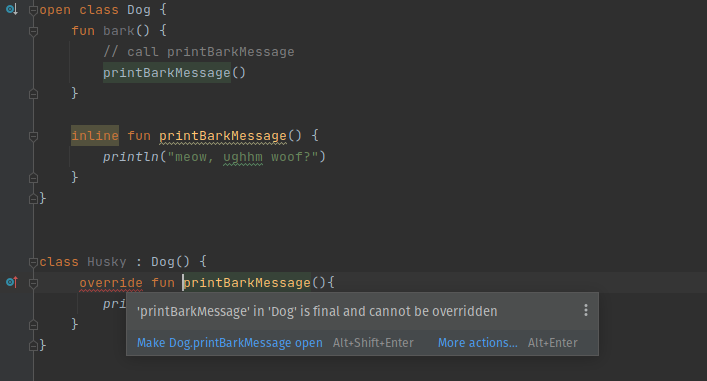 it suggests you to make it open, but even if you do

you can’t inline it, Kotlin has solved the problem for us but does it end here?

In case you want only some of the lambdas passed to an inline function to be inlined, you can mark some of your function parameters with the noinline modifier:

If we were to write this function

but why it doesn’t compile?

First, an inline function that call the lambdas passed to it as parameters not directly from the function body, can’t return out of a nested lambda, first let’s take a look of a case where you can return

this isn’t an inlined function and it’s body is not copy pasted around as an inline would and the compiler knows about its return and it’s not nested inside another lambda (forEach is an only one) but forEach is a lambda, now how do we fix stopUsingJava?

Since body can’t do non local returns and the function is an inlined one, body has to be marked with crossinline, you requested to copy-paste the code of the block into a place that expects a value by doing so it can’t contain non-local control flow, what does this mean? You can’t use return.

Another use case is reified type parameters, which require you to use inline (you’re forced to inline them), but why?

You tell the compiler to copy the function’s body (bytecode) to every line the function is invoked from (also known as inlining) from there on when you combine an inline function with reified type, the compiler knows the actual type passed as a type argument so that it can modify the generated bytecode to use the corresponding class directly.

But how does this happen actually?

You probably heard of the interface Type, which is the superinterface of all types in the JVM.

As you can see Class is implementing this interface

it returns a Type, but Type won’t do us any good since it only hold a name describing itself but we can cast the Type to a ParameterizedType.

and now we have an array of actual type arguments that hold the object representing the actualy type argument, we need the first object only.

and that’s how reified was born.

We have learned about inlining and reified and now every time you think of passing a lambda to your function (apart from being forced to use inline when you need the type parameter) you think of inlining it huh? I don’t blame you, your brain tricks you into inlining it just as it did tricked me.

Why won’t you need to do that? As explained in the previous blog post

Additionaly JVM has limits of up to 64K bytecode instructions for a single method, careful how you tread with inlining, it can be something you’re proud of, with great abstraction comes great overhead, either for you as a programmer or for the compiler.

Hope you learned something new today. Back to writing Kotlin. 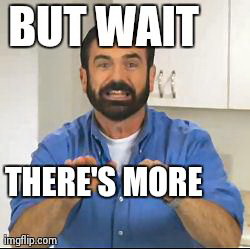 You can inline properties you know?

also when you have an internal property value annotate it with

so that you can use it inside an inlined function.

And also a function, constructor and a class can be marked with @PublishedApi, then instead of internal they’re public for the inlined functions.

From today’s knowledge we can write a simple exercise for an infamous event provider. 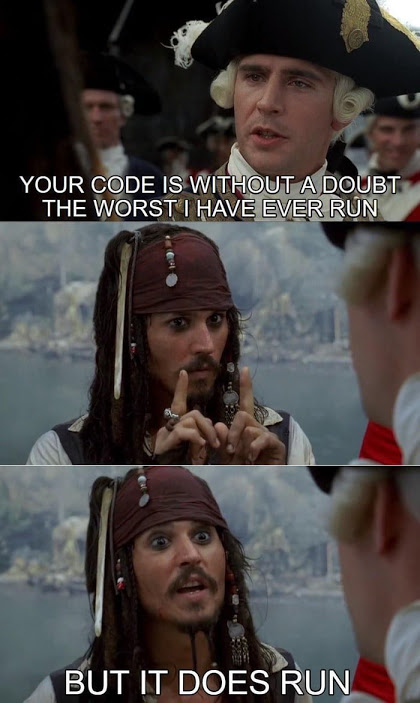 In the previous post we’ve encountered subcomponents and their hierarchy, custom scopes and we did not waste any time. In this post we’ll learn when’s the right place to inject, named and qualif...